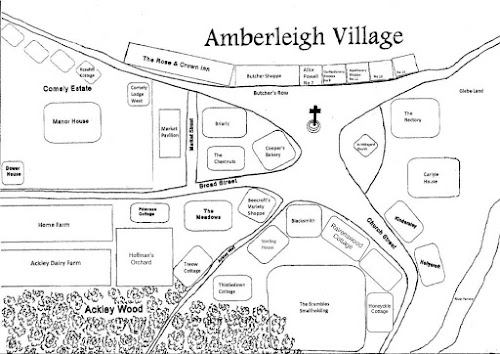 The Residents of Amberleigh

I am happy to present to you the current list of Amberleigh residents. This is subject to change as our community is ever growing. We have quite a diverse community with varied occupations and situations. You will find the member’s name linked to each character is in parenthesis at the end of each short bio. There are several residents with no member name attached to them; these were created to add interest to our swaps as they allow members to refer to them or have conversations with them giving our letter swaps a more genuine tone.

Launcelot William Penn, a Cartoon Satirist and Landlord of Butcher's Row and  his gentleman’s gentleman Horace Lofthouse of the Chestnuts (Jane)

Freyda Rebecca and brother Jacob Goldsmith, the Dower House know as "The Nettles," she is a Seamstress & Milliner, he is a Goldsmith & money lender (Jane)

Jasper Downsman is a Gypsy Tinker working at The Nettles (Jane)

Leandrea & Bryan Wallis, formerly of Galloway, Scotland are the proprietors of The Rose & Crown Inn (Nickalli)

Susanna and Thomas Thatcher of Primrose Cottage, Susanna is a weaver (Linda)

Patience Lavinia Blackthorne, niece of Lord Featherstone, of The Brambles Farm (Ruth)  Off to Italy with her chaperones for adventure.

Albert and Winsome “Winny” Butler, overseer and housekeeper at The Brambles (Ruth)

Maria and Owen Medcalf of Briarly, Maria is a writer and Owen is in banking. (Elenamarie)

Marianne and James Sedgeway of The Meadows. Marianne often tutors young ladies in music, painting, and dance while James is editor-in-chief of The Huntsman Newspaper (Sarah)

Matilda and George Cooper, with help from their daughter Lily,  are the proprietors of our Bakery.   (Amanda)

Patience Pembroke of No 9 Butcher's Row, Proprietor of the Confectionery Shop. (Deborah)

Keti Crosse, Widow of the Pharmacist who has taken over for her husband at the apothecary shop at No 11 Butcher's Row. (Julie)

Elizabeth Margarette Treadwell of Rosehill Cottage on the Comely Estate who teaches music and art.(Beth)

Miss Lavinia Rose Westcott daughter of General William Percival Westcott III, gentlewoman of independent means, residing with her aunt at Sterling House. (Indira)
Beckett Thomas Blackburn, son of Theophane and Clara Blackburn, recent graduate of Oxford University and newly employed at The Huntsman Newspaper as Reporter and Junior Editor.  Beckett has taken rooms at the Rose & Crown Inn.  (Gabi)
Henrietta Coyle of Ravenswood Cottage is married to Peter and likes to create make up that is fashionable and acceptable with skills learned from her father who was a chemist.  She also creates sketches and drawings under the name pen name Henry Collins for "The Gallery of Fashion Magazine" for ladies. (Evan)
Peter Coyle of Ravenswood Cottage is the husband of Henrietta and is a news reporter for The Huntsman Newspaper. (Evan)
Rebecca Hoffman is the daughter of Esther and Josiah, she is the eldest of three children, her sisters are Miriam and Hannah.  The family is originally from London but settled in Amberleigh at Hoffman's Orchard for a quieter existence. (Cassie)
Mrs. Delphine Estelle Louise d'Avignon who is newly arrived from France,  runs an elite finishing school for young ladies.
Reverend Shapleigh and Mary Thomas of The Rectory

Samuel Tilgheman and son Raif of the Blacksmith Shop

Eva Broome widow of Alfred Broome, former gamekeeper for the Comely Estate and her daughter Fiona of Comely Lodge West

Dr. Thornton, medical doctor of Bexford and it's environs.

Admiral Endicott and his wife Harriet who are currently renting Hythe Hall, a property of the Earl of Clevedon