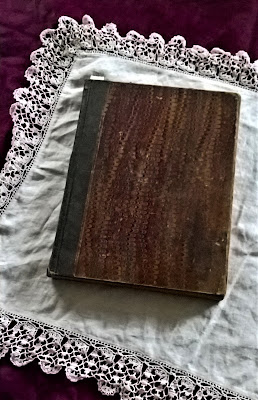 Eva Broome and her daughter Fiona are the residents of Comely Lodge West which is traditionally the home of the gamekeeper for Comely Manor. Located at the west entrance to the estate, its shroud of vines soften the grey stone making it appear more of a nest than a house. The latticed windows catch the light of the early afternoon shining like little beacons for the visitors to the manor house. The former Viscount Comely graciously allowed Eva and her daughter to remain there after the death of her husband, Alfred who was gamekeeper for the estate. The new Viscount Comely has extended this courtesy upon inheritance of the title and house which has comforted both Eva and her daughter. For them the lodge is a link with Alf Broome, dearest husband and father.

Eva knew there would never been another for her when her time with Alfred was shortened. Her beloved husband died of a chill 7 years ago and now just Eva and her daughter Fiona remain to tend the garden and look after the chickens. It was difficult at first to get accustomed to the absence of Alfred; the timbre of his voice was one of the things Eva found so beguiling when she first met him and to come into the silence of the house after working in the garden only emphasized that he was no longer part of her world.

A slender woman with gentle brown eyes that personify kindness, Eva is frugal without meanness, even tempered and has a cheerful demeanour. Her caps conceal glorious brunette hair, now with a hint of silver, braided and coiled into perfection. Eva is a tall woman with a regal nose and upright bearing, she and her husband made a striking couple when walking together. Originally from Scotland, she arrived in Amberleigh as a new bride having met her husband Alfred while visiting cousins of her mother’s in the nearby town of Bexford. Theirs was a whirlwind romance; both knew from the start they were destined to marry and no one was surprised when the banns were read in church. They set up house in the gamekeeper’s lodge and made a happy home, all the more content when their daughter Fiona was born.

In the Kitchen is where you can usually find Eva. “There is always a need for a wee bit of cake.” she often says and this makes her popular with the children of the village on May Day when cakes are given out. Her love of baking began at a young age. As a child she spent most of the time at her grandparents’ house as her mother died when she was born. She would help her granny with the baking and soon she was stirring up her own cakes. Granny always said the most important ingredient for any cake is the love you put into it and Eva has carried this pearl of wisdom with her throughout her life. The old copy book that contains her recipes is tattered and splattered but remains her most treasured possession. It was presented to her by her beloved grandmother who wrote inside the front cover “The sweetness you pass on to others will come back to you tenfold.”

A small terrier named Archie is Eva’s constant companion these days and together they walk the garden pulling weeds, trimming shrubs and shooing the chickens away from the vegetables. It is a full life, but the sound of Alfred’s fiddle on a cold winter’s evening is much missed. Fiona, Eva’s daughter helps with the running of the household and together they exist contentedly.

Photo Gallery of our work


Recently we made work bags to hold all our sewing notions for future projects.  Here are some of our efforts with more to be added as they are completed. 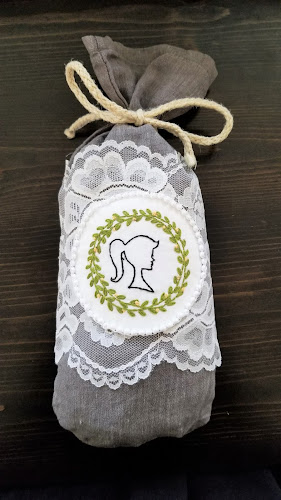 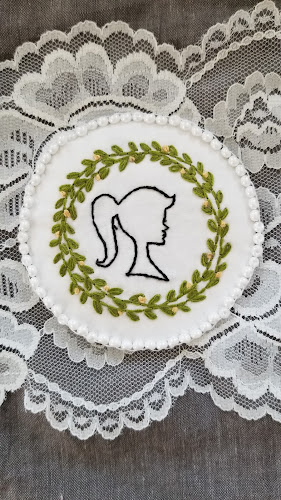 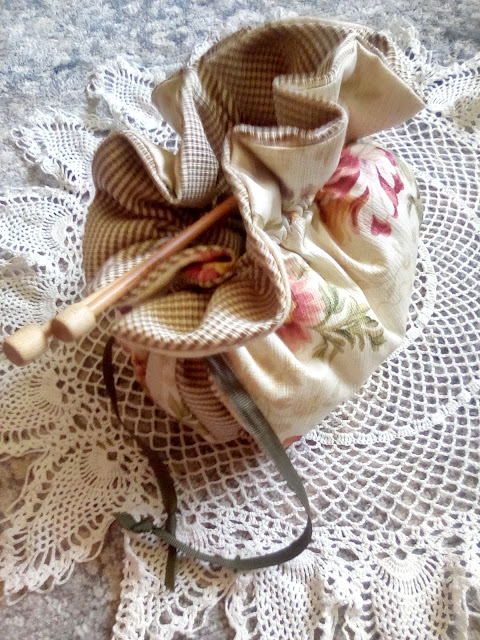 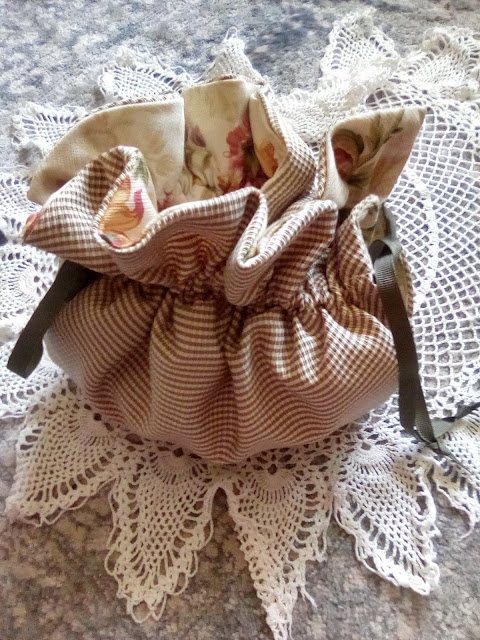 Places of Amerleigh and its Surroundings

The History of St. Hildegard Church

The church of St. Hildegard sits to the west of Amberleigh in a semicircle of land across from Butcher’s Row. The church, erected towards the end of the 12th Century, is made of warm Cotswold stone with ashlar dressing and a neat slate roof. Its tower, one of only a handful in the area with a steeple, contains the peal of six bells which were generously installed by the 4th Viscount Comely upon his 2nd son’s ordination and appointment as incumbent. It is made up of three tiers which support the steeple and has nicely carved buttresses to the corners and sides to reinforce the structure. The south-facing porch, added in the 14th century, is of timber frame construction with dwarf rubble walls and a tiled roof. Alterations and repairs have been done to the building over the centuries yet the overall appearance remains unchanged.

One enters the church grounds through a Tudor gateway at the corner of Church Street. A path of stones leads to the porch entry on the south side of the church. To the north-west of the building is an ancient Yew tree whose willowy limbs fan out over the vault of the Farnsworth Family. A stone wall encircles the graveyard and the grounds are punctuated with headstones and memorials, a solemn reminder of the life’s brevity. The cemetery is well tended and provides sitting areas for contemplation which are shaded by various trees and shrubs.

Upon entering the church through the ancient wooden door with strap hinges, one sees a mural on the opposite wall, St. Christopher holding the Christ Child, which was uncovered 30 years previously when the walls were being stripped and re-plastered. The thickness of the walls lends a quietness to the church, making it feel reverent inside. To the left of the entrance, towards the back of the nave is the baptismal font, not the original but a replacement which was donated by the Tremaine family many years after the horrors of the reformation saw the original font broken. The Font remains a tribute to the Tremaine family whose line was sadly eradicated when its sole heir succumbed to Scarlet Fever. The newer circular font is carved of Purbeck Marble and is supported by a pedestal which was later encased in oak, adorned with a beautifully carved edge. Beyond the font a door opens to a winding staircase in the tower leading up to the bells. The men who operate the bells ring peals for high days and holidays filling the village with the music of the church.

As you walk along the pristine flag stone floor of the nave which divides the long narrow high box pews, a recent addition, you cannot help notice the pulpit. Comprised of rich dark oak, standing slightly higher than the pews, its ornate beauty commands attention. Four stone mullioned windows punctuating the north and south walls of the nave lend light to the church, most are plain glass with the exception of the first window on the north wall to the left of the pulpit which has the coat of arms of Viscount Comely’s family, faithful patrons of the church. There is speculation as to whether the nave windows too had stained glass but to date nothing to this end has been recovered. Under the windows on the north side of the nave Sir William Daumaris, warden of Hadderly Castle and Knight of the Crusades, lies in serene repose. This gallant knight survived the Holy Wars only to have his image desecrated in the vandalism of the Reformation. To this day the parishioners remember him with flowers on his saint’s day of May 23rd.

Behind the pulpit is the Norman chancel arch made up of several carved stone rings with an ornate zigzag moulding on its edge. The capitals are cushion and scalloped, the west side showing the cat-like personification of Green Man symbolizing the cycle of life.

The Apse is timber frame in construction with beautifully carved medieval faces looking down upon the congregation. A magnificent trio of stained glass images that glow in the afternoon sun is behind the altar. This glass had been removed when word of the destruction of the reformation approached and were carefully replaced decades later upon their discovery buried beneath the yew tree where the Comely vault was erected. Three rows of medieval ornately decorated encaustic tiles lay in front of the simple Jacobean altar which is flanked by two slab graves marked only with crosses. The north and south walls have faded depictions of Heaven and Hell which still remain a sight to behold when the sun illuminates the Apse in late afternoon.

St. Hildegard Church is a statement of serenity in the village of Amberleigh. The ladies of the parish decorate the church with flowers from their gardens in turn and the church wardens ensure that everything is in order for Sunday services and Holy days of worship. The parishioners are welcoming and all who come to worship within St. Hildegard are received as friends.


This short history of St. Hildegard Church was prepared by The Reverend Shapleigh Thomas, recently appointed vicar of the church who invites all to worship with us on Sundays at 9:00 am and at 6:00 pm for evensong.