Photo Gallery of our Journals


We've been working on our journals, documenting our swaps and keeping a record of our village.  Here are images of the members' journals. 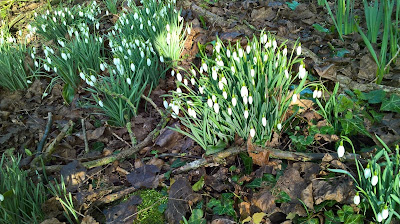 Even in the coldest days of winter a little springtime can be found. Since the trees have the beginnings of bud and the birds are more vocal these past few mornings my apprentice, young Salley Owens, and I went on a little walk to do a bit of foraging. It was a fine sunny day, crisp and calm, perfect for a stroll in the Ackley Wood. A nice meandering walk gives one the opportunity to take morning exercise as well as be productive. Baskets in hand, shawls wrapped tightly about us, Salley and I set out in the hopes of finding some early violets.

The leaves crunched under our feet as we went on. Snowdrops were plentiful and such a cheery sight. Drifts of them here and there beckoning us to come closer. Salley is an eager pupil and so we talked of the healing properties of the snowdrops. The ancients used them readily to clear their minds and improve their memories which prompted Salley to rub the leaves on her forehead to help her remember all the things we talked of on our walk, clever girl. We added some leaves and flowers of this cold weather friend to our baskets.

We passed by the birch and checked that the plugs held fast so that when the sap begins to run we may collect it and enjoy the medicinal benefits of the sweet nectar from this beautiful tree. It should not be long now for the catkins are showing already. After examining the tree, a bit of bark was taken for making ink later on. 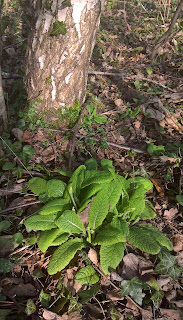 Good Tom Meyrick came upon us as we studied the primroses whose bright green foliage made a nice contrast against the fallen leaves of autumn. Their yellow blooms, just beginning to open, brought a splash of warmth to the forest floor. Tom spoke with us a for a time and told us of some rose hips he came across near the fallen elm he was chopping for firewood, a most welcome suggestion.

Winter savoury was spotted near the sitting stone, sheltered by that ample rock and growing freely. We were careful to only take a small quantity for our purposes and went on to pick some new nettle leaves to add to our baskets. Nettles aid the circulation and it is said the Scots rub them upon their legs to induce warmth. The soft new leaves made into an electuary with sugar and honey help to aid shortness of breath and wheezing which will help Samuel Tilghman.

Our baskets were brimming with helpful plants, barks and mosses, both ground and tree, so we made our way to the old elm where Good Tom Meyrick advised us the rose hips were plentiful, to complete our scavenging. Tis good to walk and talk on a sunny day in the wood: a most productive morning and leading to an equally productive afternoon of sorting and preserving our bounty. We were too early for the violets today, but we’ll forage again when they are in bloom.

A Letter from Alice Powell to her brother William

I pray you are well and safe and out of danger’s way. I must got to Bexford tomorrow so I shall post this letter to you in hopes it may find you in good time. I have not had a letter from you in more than a month and would welcome news from you.

Life here in the village is unchanged. I spend time making my lace when the light is good. The colder months with shorter days are a challenge but my table by the window is south facing and affords a good deal of sunshine on fair days.

Dear William I have heard a little rumour that the King may be visiting Cheltenham and his progress is to pass by us here in Amberleigh on the Cheltenham Road. How exciting that shall be, we may even catch a glimpse of His Majesty. I do not know as yet when this auspicious day is but I shall give you all the details when I learn them. You know I delight in hearing all manner of news. Did mother not comment “Do not tax yourself reading the newspaper, but speak with Alice, she shall keep you well informed.” Dear mother, I miss her wit and good sense as you must also.

Mr Whycliff in Bexford has sent and asked me especially to bring my lace to him as he has an interested lady who would buy it all. I am gladdened to hear it. I worried for a while that bobbin lace was no longer the fashion when I took my lace to Bexford last and Mr. Whycliff had sold none of my previous bundle. I would not have been able to remain at the house here if it were not for your kind allowance sent to me. Perhaps I may now be able to afford more candles to read and work by in the evenings. I pray it is so.

I thought I should tell you that Samuel Tilghman has not been well. Old Mary and Keti Crosse have been in conversation about what ails him and have both been ministering to his needs. He has been abed this past fortnight; his son Raif has dutifully taken over the work at the smithy. He is a good lad, quiet, I admit. I can draw no more than a few words from him and he must have conversation as he sees many people each day. We ladies have said prayers for Samuel and leave it in God’s hands to deliver him from this terrible illness. Thankfully no one else has shown these symptoms. In church on Sunday I paid particular interest to those present to see if there could be any sign of this illness spreading but all seemed in high spirits. Some in the village, myself included, thought there may be an epidemic, when Owen Medcalf was also ill but he is getting better with every day, praise be to God.

The hawker has been to the village this past week. He is a shrewd one that Daniel Chapman. I heard him telling Eva Broome his knick knacks were from the finest factory in London yet he told me on his last trip to Amberleigh they were from Manchester. His compliments and fabrications about his wares are outlandish and yet some would believe him. He told Tudor Owens that a man of his standing in the village ought not to be seen with a plain snuff box but one of his more ornately carved ones as it more in keeping with Tudor’s status in town. He said that Tudor would have compliments on it and many would believe he paid much more than he had, I wasn’t fooled by his smooth tongue but Tudor bought the snuff box. I noticed his prices were a bit more dear this time and also that he has a mule for his cart now instead of the donkey he used previously. I have always been a little wary of that man; his way is much to smooth and he makes the young ladies blush. He doesn’t try his flattery on me as I am sure he knows I put no stock in his fancy words. I know you tell me he is a man of business and must rely on his sales pitch for his keep but fabrication is not admirable. I did have a good look over his cart to see what he was selling. I found two nice bone bobbins to my liking and did purchase them, but I would have nothing else from him.

William, do you know, I thought I saw something rather odd after church on Sunday. Lady Caroline and Lady Elizabeth were chatting and I am quite certain I saw Lady Caroline lift the lapel of her spencer and show something, what I do not know but I shall be very alert when I am nearby them to see what I can learn. This is a bit of a mystery to me and I am curiosity personified to find out what is afoot. Yes, I can hear you once again telling me to reign in my imagination, but I am certain I did witness some secret exchange. I am not so fanciful in daydreaming as you believe dear brother and though you delight in telling me I put too much emphasis on things of no import, I tell you I did see something unusual.

The light fades William so I must close. I remain your devoted sister,