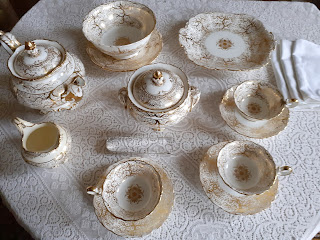 The Pleasure of Your Company

Tea, that most friendly of drinks, has been an enduring theme in our social history. Its humble beginnings have evolved into a sharing of not only a cup of tea but companionship. Arriving in England in the mid 17th Century, tea, or cha as it was sometimes referred to, became widespread during the 18th Century and today it is enjoyed around the world.

Many traditions and ceremonies have arisen from the simple act of savouring a cup of tea. In the Georgian and Regency Eras the lady of the house performed the ritual of making each of her guests a cup of tea. She would sit by a small table that had been laid with an urn of hot water, her tea cannister, sugar, milk and her china as well as any sweets or savouries she would offer her guests.

The tea was kept in an ornate caddy which usually had two large compartments to hold the China tea and the green tea. Each tea compartment would have a silver spoon for measuring and mixing in the small glass bowl which was situated between the two tea compartments. The caddy was usually a beautifully decorative wooden box and was kept out to be admired and was always locked, as tea was an expensive commodity.

Sugar, also dear, was likewise kept under lock and key. It arrived in loaves which were further refined in the household kitchen. The “loaves” were cut with a sugar cutter and made into smaller pieces to fill the sugar bowl. When people began rebelling against slavery, sugar was shunned by many; others had special sugar bowls made declaring the sugar therein was sourced from free workers and not slaves so the guests may enjoy sweetened tea without condoning slavery.

Amongst the china on the hostess’ table there would be a large bowl and saucer known as the “slop bowl” This item played an important part in the making of tea for one’s guests. Because the tea was loose leaf, a strainer was required, but some grains of tea still escaped into the teacups when the tea was poured. It was common not to drain your cup as there would most assuredly be dregs at the bottom. This is why the slop bowl was essential, to ensure every cup of tea brewed was fresh. Should another cup of tea be offered, it could not be poured on top of the remains of the first cup, these grounds were relegated to the slop bowl so that a fresh cup of tea may be made and not tainted by the remnants of the first cup of tea.

With all her accoutrements assembled, the lady of the house presided over the tea table by enquiring whether her guest would like China (black tea), green tea or a combination of the two. Many ladies would have made their own “house” mixture of tea which they also offered their guests.

Warming the tea pot was essential in offering your guests a hot cup of tea. A cold teapot would cool the tea making it tepid and not agreeable to drink. Once the tea was chosen and brewed, the hostess would enquire how her guest drank her tea and would add sugar and milk as directed. Often there would be cake or sweet buns offered with tea, or alternatively, small savouries on occasion.

The hostess would call for more hot water as needed and the process of making tea for her guests would be repeated. Generally guests would only pay a call of no more than 15 to 20 minutes which meant the lady of the house would make many cups of tea for her at home.

Today we make our tea in a variety of ways but it is the sharing of a cup of tea with one’s friends that has endured, making it one of the most widely consumed drinks in the world.